With Black now seeking higher office, the question now is who will run for the post. The rce for State Agriculture is typically a lower profile race but not anymore. There's a bevy of potential candidates on the Republican side who could run from State Senator Tyler Harper to State Representative Robert Dickey, but what about the Democratic side?

LeMario Brown, 34 who's currently serving as City Councilman for the city of Fort Valley is a Pecan Farmer out of Peach County. He's a graduate of Fort Valley State University, later studied at Columbia Southern University interned at the U.S. Department of Agriculture. Brown. Brown has the ability to appeal to younger voters and also stem the loss of youth in the agriculture industry. 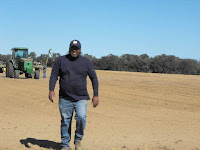 Ricky Dollison Sr. a 1978 graduate of Worth County High School is a 4th Generation Farmer and owner and operator of Warrior Creek Premium Meats. The Tifton resident farm over in nearby Worth County and also the former High School Football All American was featured in one of Sen. Warnock's digital ads during the 2020 campaign season. He created Ag First Community Cooperative.

Given how hard its been for Democrats to find a strong candidate with a strong Agricultuel background, either of these two upstanding gentlemen would move Georgia Ag industry into a new era and would be a strong advocates for small family farms.